Back to Our Families 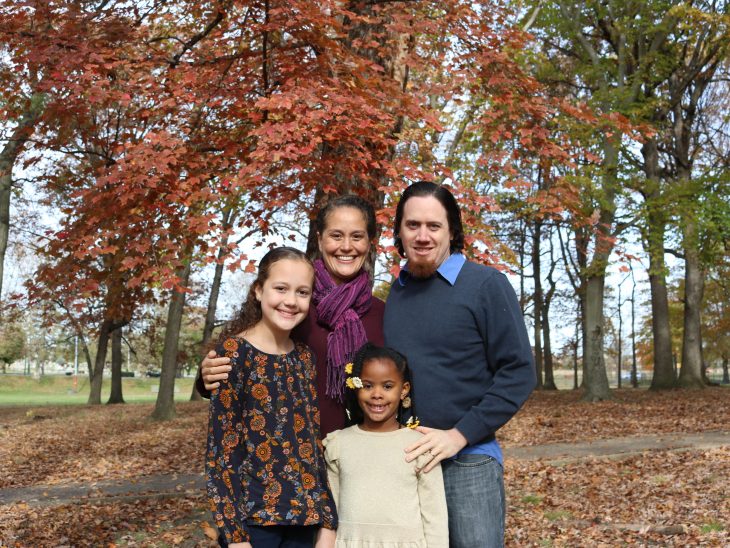 Hello, we’re Bill and Julia. Thank you for reading our story and learning more about us.

We can’t imagine all of the feelings you have gone through so far. We have been praying for you and longing to meet you and your child. We would joyfully welcome both of you into our lives through adoption; but our hearts are heavy, knowing that this isn’t a simple decision for you. We know there is both joy and loss in this process. We believe we can face this together.

If you choose our family as a home for your child, we would be more than honored. We would be excited to have ongoing contact with you also, if that is what you desire. We hope our smiling faces and art make you smile today. You are loved.

More about Bill and Julia

Our story starts in college . . . We met in 2003 and were friends for a few years. During our friendship, we hung out on campus, went out to eat with friends, and studied for art history tests. But, the funniest memory is the day that Bill helped me (Julia) shovel my car out of the snow . . . but had no shovel, so he used a cafeteria tray!

I had a crush on Bill, but kept it quiet. Bill appreciated me as a friend, but didn’t “like” me. However, he eventually asked me out. And months later, he popped the question! We graduated in May and got married in 2006.

Quickly after we married, we became parents! In 2007, we had Grace. When Grace was little, we desired another child but were unable to conceive. We pursued adoption, and adopted Gloria in 2013. After that, we unexpectedly became pregnant in 2016, and lost the baby. Sadly, this happened again in 2017, and we lost twin boys.

We’ve had joys and losses on our parenthood journey, but still have the desire to parent again. As we’ve raised Gloria, we have seen many aspects of adoption: joy, grief, beauty, and connection. We love seeing our two daughters connected, despite coming from different places. We love seeing our Gloria flourish, and we love the connection we have with her birth family. We love open adoption and we long to give that to another child!

Julia is legitimately the most wonderful wife I could imagine having (and actually, she’s better than what I imagined a wife could be when I was younger). It amazes me how much she loves me.

There is so much that Julia loves to do – spend time with family, make art, go for walks, enjoy nature, play with our girls, drink coffee, talk to our parakeet, help friends at church, read books and pray. She wrestles honestly with hard things, but she is also such a joyful person and loves so many things in life.

Julia cares deeply about people, and that’s a big reason why she’s a wonderful wife and mom. She’s a big ‘developer’, meaning that she loves to help and connect with little kids. This is why our two girls do so good at school, and why they love making art. I get so excited when I think about Julia being a mom again.

One of the first times I hung out with Bill, I thought, “I want to marry him or someone like him.” Bill loves God and genuinely cares for people. He is a wonderful husband and Dad to our children. He is a dedicated listener. He can be playful and serious, and is a committed, steadfast man.

Bill knows how to engage with different types of people. He can dig deep in conversation with Grace and has silly wrestling time with Gloria. He’s gifted as an art teacher to teens and a committed member of our church. He loves to work in the garden in the front of our house and made it a little “oasis” for us in the summer. In football and baseball season, he’s a faithful fan of the Eagles and Phillies.

Being active in the community is important to Bill. He is a board member of an organization that helps expecting moms, and he enjoys working at church to help make the space visually appealing. At the same time, he is deeply committed to his family and prioritizes us. Bill has been a wonderful Dad and I’ve seen his passion for adoption grow. I know he would make a wonderful Daddy to another child!

We live in a colorfully decorated home in the Philadelphia area.Each room of our home is filled with original artwork by either us or our daughters! Most of the time we gather in our living room to spend time together. In the summer, we love to hang out in our front yard when our garden is in full bloom, and the girls swim in their little pool. The girls love to race as they ride bikes in the back alley.

Our neighborhood is full of people of all ethnicities and ages, and we love that! When we chose where to live, we wanted to be in a diverse place where our girls would see different people regularly. Our neighbors are all very kind people that we trust. It’s the kind of small community where we all pitch in to help shovel when it snows!

We enjoy being able to walk to parks nearby, walk to the pool, or take a short drive to the river. Even though we’re in an urban place, green spaces are nearby and we love being in them! We are also close to Bill’s job, our church, and the girls’ schools. We’re thankful for lots of things to explore in our community!

We are very close with our families. We were both raised with dedication, commitment, and love, and we aim to pass on this same kind of tender love to our children.

Although we don’t live close to our immediate families, they aren’t far away and we are able to make a day-trip to see them. However, when we were little, we lived closer to extended family and both had chances to be with family often: Julia’s Aunt was her babysitter and she spent a lot of time with her cousins. Bill grew up seeing family regularly, but when his parents became missionaries, his times with them were less frequent; but he saw his Mom grow as she sacrificed her comfort to follow God’s leading on their lives. That really shaped him and makes him who he is today.

Our daughters have grandparents who spoil them! The girls are very close with them and their aunts and cousins. Holidays are full of presents and treats; the girls even go to “Grandma Camp” each summer with Bill’s Mom, where she teaches them skills like how to make a grilled cheese sandwich or how to sew. Julia’s Mom is in touch often, and prays for us. Both sets of Grandparents welcome both our daughters and are very supportive (and excited!) for our second adoption!

We love getting together with family for holidays. Thanksgiving for Bill’s side is 60-plus people crowded into a house. Julia’s family is much smaller-scale but no less loving! Julia’s Mom buys tons of goodies and treats whenever the girls visit and loves to spend time with them.

Our oldest daughter, Grace, loves to bake, read, learn, and try new things. Her favorite thing to do is to learn about other cultures and cook food that is specific to that culture. She also thrives on teaching. She loves to teach Gloria things she’s learned and help her in different ways. Grace does like* to be on her own, but she also thrives on being with her friends. She is responsible and knows her priorities, but enjoys doing things for fun, too. She thrives as an older sister and is very excited about having another younger sibling!

Our youngest daughter, Gloria, is bright, cheerful, and compassionate. She loves to draw from her imagination and from life and loves school. She enjoys painting her nails, having her hair braided, and being a “girly-girl.” She also likes to help in the kitchen with whatever is going on. Gloria is very tuned in to how others feel. If she sees one of us upset, she will immediately ask us what’s wrong! Gloria is very connected to her toddler cousin, Lucca (2) and loves to hold her baby cousin, Nico. She loves helping him and playing with him; she is a little mama! She will absolutely love having a younger sibling to help, teach, and love.

We are a family of artists! Each of us loves to create. Our home is full of creative energy: on a Saturday, you can find Grace baking a dessert, Bill making homemade pizza, Julia drawing letters, and Gloria drawing a scene from life in her sketchbook.

Both of us love to read and we are unashamed book hoarders! Art, anti-racism, Christianity, cookbooks, poetry, novels: you name it, we probably have a book for it, and if we don’t, I (Julia) would be happy to find one at our library! We also have tons of kids’ books that our girls enjoy. We love to learn by reading and would love to share this love of reading with another child.

We enjoy being outside together. We especially like to go for walks or explore the woods just a few minutes from our home. There are always wild turkeys, deer and turtles near the river! We love to share these moments with the girls, and look forward to doing the same with a new little one. We also enjoy just playing board games together and cuddling together with popcorn on movie night. 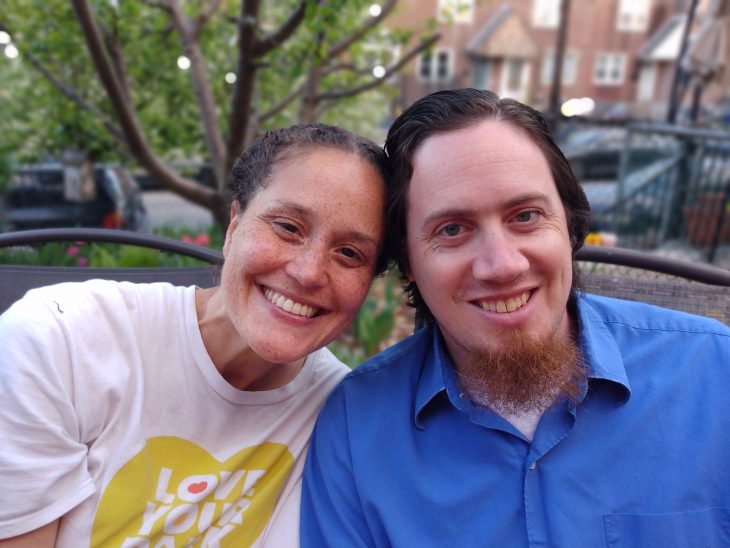 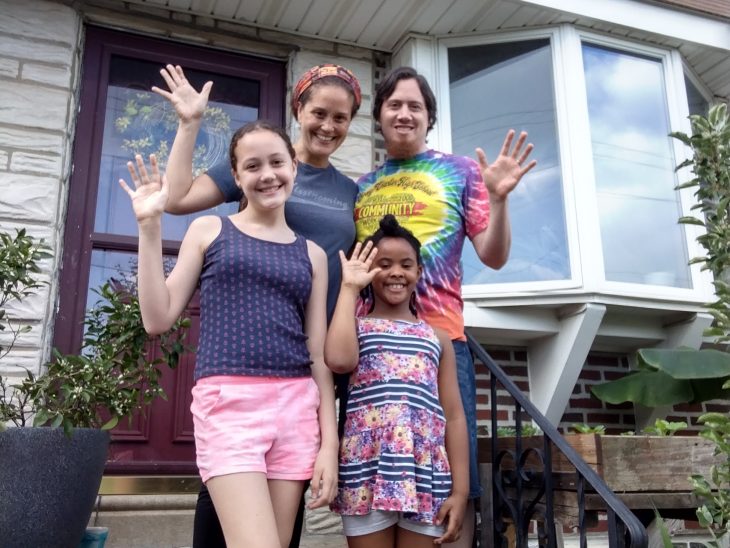 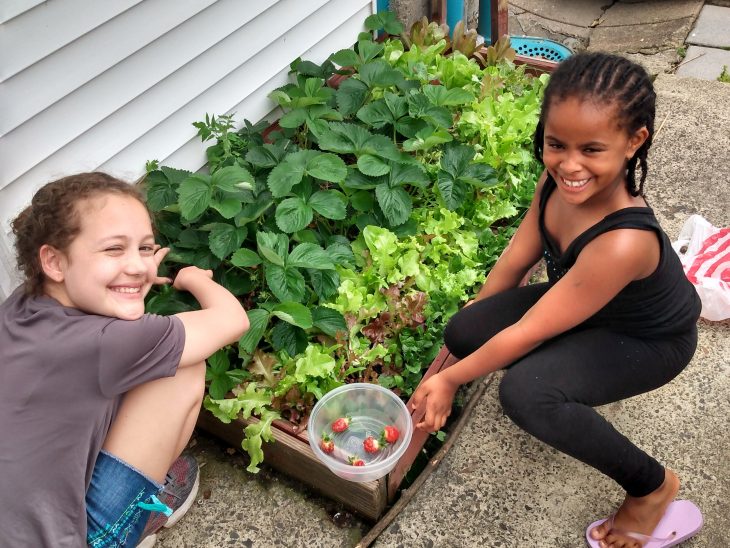 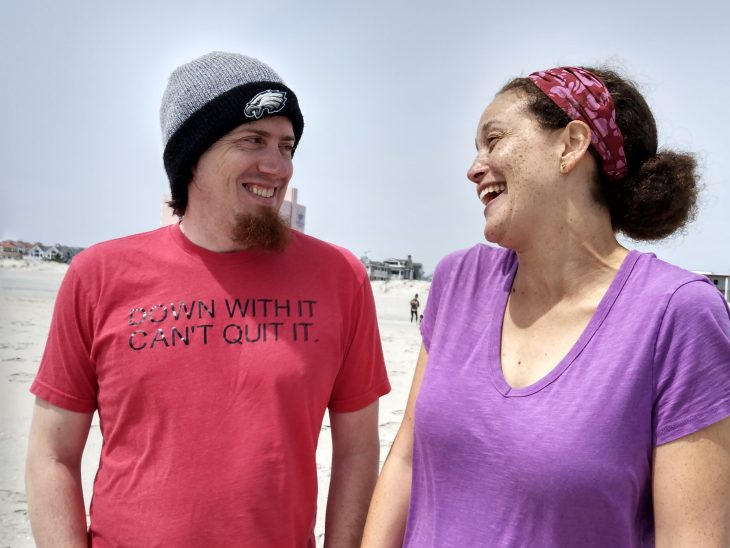 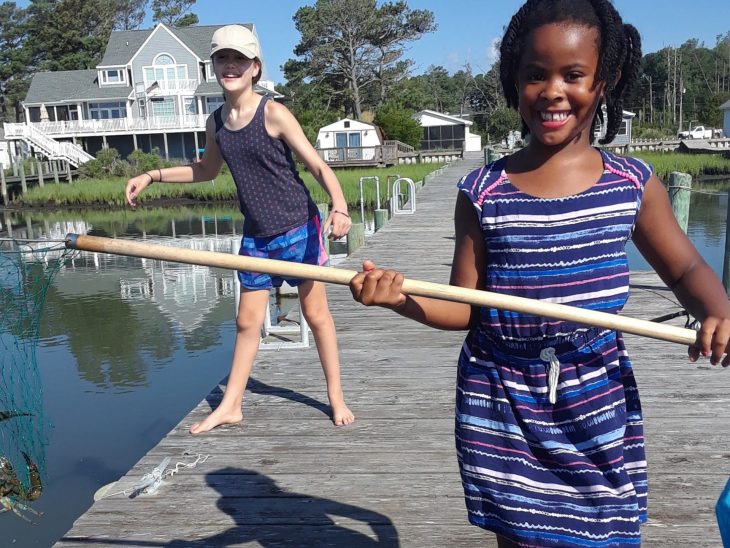 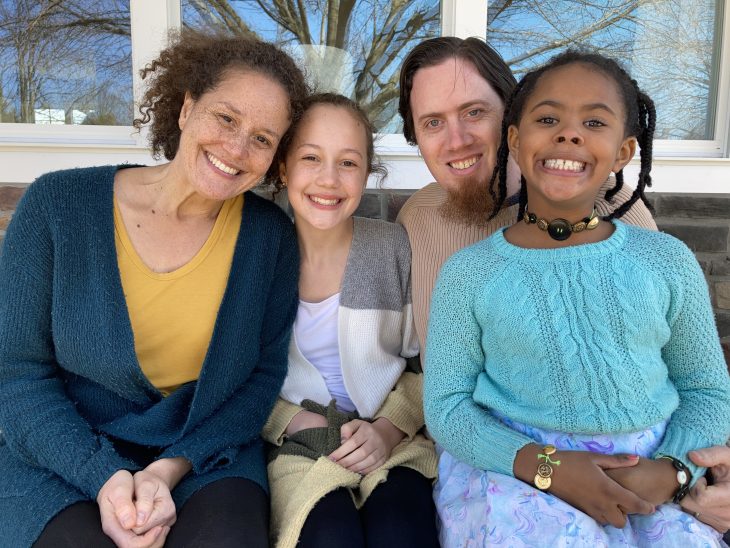 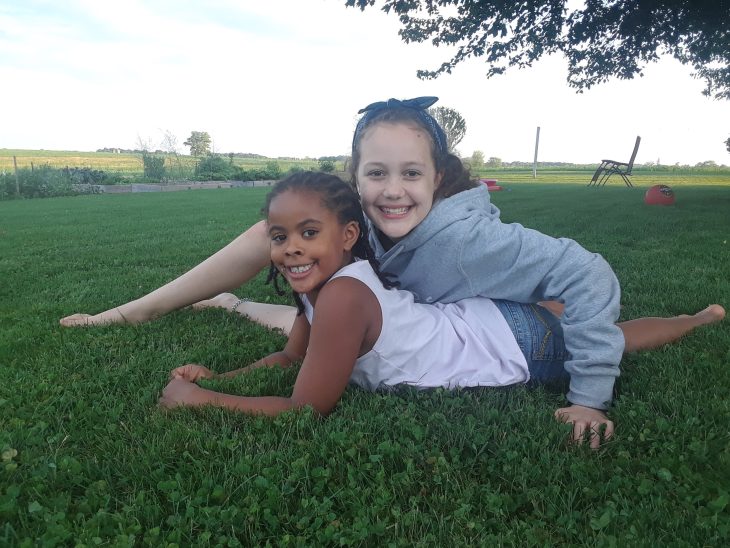 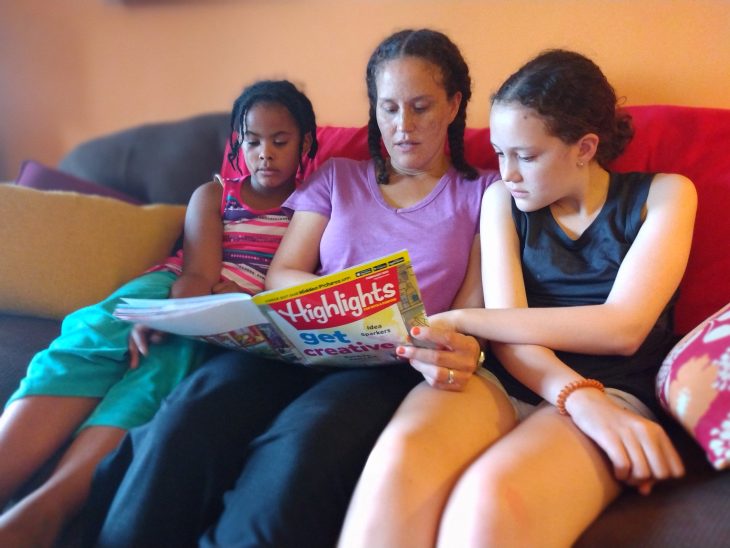 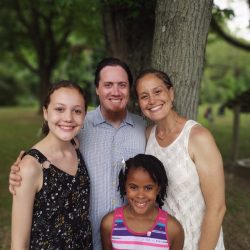 Thank you for taking the time to look at our profile! We think of you highly for even considering an adoption plan, and for loving your child so deeply. We long for another child to be added to our family and to see our girls be big sisters together!

We value staying in touch with Gloria’s Birth Mom through updates, texts, and visits, and would promise to have openness with you if that’s your wish. But no matter what level of openness you choose, we will always remind the child of his or her story and the amazingly beautiful person you are, who made a loving sacrifice for her child. We have several adoption picture books that explain the hows and whys of adoption, and we also have a photo book of pictures of everyone in Gloria’s family — so that she can see everyone who loves her. We would love to do the same for this child.

Just like we have cared for our own daughters and have been there daily to provide the care, nurture, and love they need, we promise to do that for this next child. We can’t wait to watch him or her smile, hear his or her cries, wipe away the tears and be their ‘safe place’.

We wish you all the blessings in the world as you make this decision.